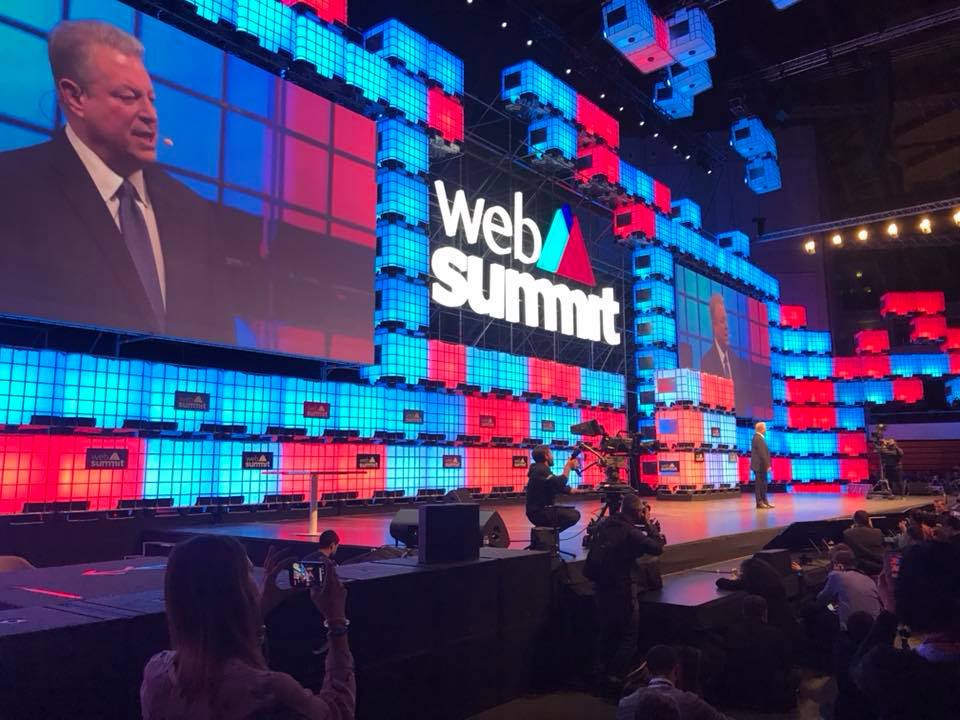 The second week of November, a date traditionally booked for the meeting of world-class CEOs, entrepreneurs, investors, marketers, hackers, politicians and celebrities. All of them united with the same love and goal; to use technology and the world wide web to explore what is beyond the limits of our society and move us forward. Just like Galileo Galilei and others that sparked the scientific revolution that eventually led to the discovery of the Americas, these revolutionaries at Web Summit want to define and explore the new rules that are now shaping our world. So, whether it’s explaining heliocentrism, gravity or deductive reasoning in our times, it’s these new explorers that I want to talk about. The ones that are using their experience and unique insights to discover “new Americas”.

Web Summit couldn’t have kicked off with a bigger surprise. At the Opening Night, to the surprised roar and applause of just about 60,000  (not everyone was able to attend the opening day’s ceremonies) people, Paddy Cosgrove –  Web Summit’s CEO, introduced the headline speaker; professor Stephen Hawking, connected via video-conference. With the room dead silent, Mr. Hawking introduced one of the conference’s main themes: artificial intelligence. He warned of the dangers artificial intelligence can pose for us, but ever the optimist, he expressed his absolute certainty that we needn’t worry, if we identify them correctly and do everything in our power to mitigate the dangers. Mr. Hawking called for the creation of a global oversight body to monitor and distribute best practices. For the first time in a long time, oversight body didn’t sound like a horrible idea.

The conference was filled with AI projects, from an Albert Einstein robot to Kernel, a company that is focusing on using AI to treat neurological diseases and enhance our brains.. Throughout, we spoke to several attendees and got generally optimistic views – for example seeing how AI can help marketers run more effective campaigns.

Web Summit isn’t afraid of the big questions, that’s for sure. In a conversation with some of the world’s leading journalists, the main stage hosted two speakers who arguably used big data and micro-targeting to change theworld the most in 2016; Alexander Nix, CEO of Cambridge Analytica and Brad Parscale, Trump Campaign’s Head of Digital.

It was odd looking at Mr. Nix during his interview. Without a doubt, he’s one of the most intelligent people to walk on this planet. In his custom-tailored suit, light-rimmed glasses and perfectly done hair, he simply radiated confidence and intelligence. He explained, how seemingly benign data, such as magazine preferences or cereal choices can be used to deeply understand voter problems and needs. “But even the best analysis in the world can’t turn a fundamentally bad candidate into a good one.” he said. There wasn’t a single argument one could counter to his points and that was scary.

Mr. Parscale, amongst others, spoke about the importance of good creative and synchronization of campaign channels. Being in charge of online as well as offline campaigns, he was able to synchronize messaging to address the needs of the individual neighborhoods that he needed to persuade; be that through online ads, door-knocking campaigns or traditional media worth over 300 million USD in the 90-day campaign. Not surprisingly, all the main players, amongst others Facebook, Google or Snapchat, were lining up at the doors to help the candidates run campaigns effectively and efficiently. “And we gladly accepted, because who knows more about Facebook, than Facebook itself?” finished Mr. Parscale.

Both Mr. Parscale’s and Mr. Nix’s interviews together showed us how a well executed big data analysis in synchronicity with micro-targeting can create a campaign, where up to 150,000 ads were run daily and 1,5 billion impressions were made – ultimately telling every voter, what they wanted to hear.

You know you are at a cutting-edge conference, when Andrew Jones, the man behind some of the biggest reality altering movies of the last decade, talking about enhanced reality and virtual reality make you feel like you have seen it all before. Maybe that’s because I have, (Avatar or Jungle Book, for example come to mind).. Don’t get me wrong, he showed some of the most awesome materials anyone would kill for a chance to see at a different conference, but in comparison to other Web Summit speakers, they simply didn’t have me in awe. If anything, this is a testament that shows just how far we have come in melding reality with film.

Just as Web Summit couldn’t have started with a bigger bang, it could hardly have ended with a bigger one – and with a more important message! To the standing applause of a filled center stage conference hall, Paddy Cosgrove introduced the closing headline speaker, former Vice President, Al Gore. With the audience alternating between dead silence, laughs and applause, as if choreographed and on cue, Mr. Gore spoke about the need to adapt and his confidence in humanity’s capability of doing just so. Giving examples of companies he invested in; a 1100 km range electric bus or a 6-second battery switch electric scooter, and BMW presenting their i3 and i8 cars just outside, his confidence doesn’t seem just like a nice marketing slogan. He showed that he was willing to invest in the future and in doing so, inspired others to do the same.

The hundreds of other explorers out there…

Based on the fact, that everything described in this article happened in only one of five conference halls, one could probably write a book about Web Summit 2017. It’s with a slightly heavy heart, that this article doesn’t cover the dozens of other world-class speakers – Wycleaf Jean, Rosario Dawson, Dustin Moskovitz, Vladimir Klitschko, Stan Chudnovsky (Facebook’s VP of Messenger), Mark Sandys (Guinness’s Head of Marketing) or the Wizard of Moz, just to name a few. Or the hundreds of amazingly cool start-ups hustling their game throughout the three days, sunsets and nights. If you want to learn about the thoughts and stories they shared with us, look at our video summaries of Day 1, Day 2 and Day 3.

My biggest appreciation however goes to Paddy Cosgrove, the entire team of Web Summit 2017 and the city of Lisbon, Portugal. They prepared an event filled with inspiring insights,  and motivating CTAs, where everything worked – from accommodation, through Wi-Fi to Uber – and most of all, where nothing was a problem and everyone felt welcome and a part of something big. A part of the team, discovering the new America.

I am an experienced business-to-business marketing professional with experience from tech start-ups as well as corporations. I am currently heading the marketing department of ROI Hunter, a Facebook Marketing Partner helping e-shops advertise effectively and efficiently on Facebook and Instagram.